(“Valkryia” by Amon Amarth plays as Vic Venom comes out to the stage with his father, Scott Venom. He brings a chill as the members of the audience are left skeptical as he passes by making his way to the ring)

Clark Ruggerio: What a great way to start off our annual EAW Week with Fight Grid LIVE as two of Showdown’s newest additions go head to head! I don’t know much about this Vic Venom guy but he seems poised and focused, it’ll be interesting to see what he brings to the table here tonight.

Ben Knight: Yeah, Vic Venom is certainly new to EAW but he’s pretty keen of sharing of his accomplishments elsewhere, but will they really help him here?

(Vic Venom enters the ring as Scott Venom stays outside the ring yelling motivational words at him following him around the ring. Vic sits down in his corner as “Applause” by Lady Gaga plays and Archimedes J. Manson comes out to outstanding applause. He plans to shoot his “BONKERZ-OOKA” into the crowd but it backfires and it breaks, he shrugs and walks to the ring throwing it to the side for the ref to kick under the apron)

Clark Ruggerio: Archimedes proved that he’s here to stay by beating Ronin just a few days ago, can he solidify that by beating Vic Venom tonight?

Ben Knight: Well Vic Venom is 10 times the man Ronin is, I mean look at his tattoos and everything, he’s scary alright?

Clark Ruggerio: That means nothing-

(Archimedes enters the ring smirking at Vic before going to the top rope and dancing for the crowd to see. “Applause” fades off as Vic Venom is seen being whispered to by Scott Venom and Archimedes getting a laugh out of it)

Scott Venom (Off-Mic): GET HIM!

Clark Ruggerio: OH! VIC VENOM DASHING TO ARCHIMEDES AND KNOCKING HIM DOWN WITH A LEG SWEEP! Vic waiting for him to get up, ROUNDHOUSE KICK- NO MANSON DUCKS UNDER, HE’S MOVING BACK…DISCUS ELBOW! VIC TRIED TO HIT HIS FINISHER, THE LEGACY BUT MANSON HAD HIM SCOUTED LEVELING HIM DOWN! Vic stumbling back, he’s running again…PUSH-OFF DROPKICK BY ARCHIMEDES J. MANSON! Archimedes is fired up early in this match as he gets up quicker than Vic, Archimedes grabbing Vic, A PUNCH TO THE GUT BY VIC VENOM! Vic getting some space between Archimedes, Vic walking up…KNEE STRIKE! ARCHIMEDES STILL UP…HADOUKEN! BUT VIC ISN’T AFFECTED, that move will never be effective. VIC WITH ANOTHER KNEE AS ARCHIMEDES IS FROZEN STILL SHOCKED HIS HADOUKEN DIDN’T WORK! Vic Venom hooking the legs going for the pin on Manson…

Ben Knight: Quick kick out by Archimedes! Vic grabbing Manson by the head- MANSON WITH A ELBOW SEPARATING HIM FROM VENOM! Archimedes getting up, GUT KICK BY MANSON…UPPERCUT BRINGING VIC DOWN! Archimedes going up to the top rope…DIVING LEG DROP! Archimedes rolling up, ELBOW DROP! Manson laying out Vic here as Scott watches on, looks a bit agitated doesn’t he? Manson bringing Venom up again, ANOTHER ELBOW! BUT VIC GRABBING MANSON…KNEE TO THE SIDE, SIDE KICK, DISCUS FOREARM, KICK TO THE KNEES… BICYCLE KNEE! THE VIC-TORY CONNECTS, hah nice pun.

Clark Ruggerio: Yeah whatever, Vic running, he leaps up, top rope, NO HE’S ON THE ROPES, LITERALLY! VIC JUMPS, DOUBLE V- NO ARCHIMEDES MOVES OUT OF THE WAY OF THE ATTEMPTED DOUBLE FOOT STOMP! Vic walking towards Archimedes, OH SCHOOL BOY WEDGIE ROLLUP, NO VIC GRABBING THE ROPES QUICKLY WHICH RESULTS IN AN EARLY ROPE BREAK! Vic pulling himself out of the ring as Archimedes waste no time dashing for the ropes…SUICIDE DIVE TO VIC VENOM! ARCHIMEDES ABOUT TO ROLL HIM IN THE RING- OH IT’S SCOTT VENOM! SCOTT YELLING AT ARCHIMEDES- MANSON THROWING VIC VENOM AT SCOTT! Archimedes rolling in the ring as Scott helps Vic up, MANSON IS ON THE TOP ROPE BUT VIC QUICKLY GETTING UP ON THE APRON GRABBING HIM, ARCHIMEDES THROWN RIGHT OFF THE TOP TURNBUCKLE BY VIC VENOM! VIC UP ON THE TURNBUCKLE…DOUBLE FOOT STOMP! Vic urging Archimedes to get up as he stumbles up…THE LEGACY- WHAT!?!!?!? ARCHIMEDES DOING THE SPLITS, SUPERKICK! JK! JUST KIDDING CONNECTS! ARCHIMEDES GOING FOR THE PIN ON VIC VENOM!

Ben Knight: KICKOUT! Vic sitting up as Archimedes gets up off his knees, he’s running the ropes, LARIAT BY MANSON, ARCHIMEDES ENCOURAGING THE CROWD TO GET TO THEIR FEET- VIC KIPPING UP TO HIS FEET, ARCHIMEDES DOESN’T SEE IT, SHOOT KICK BY VIC VENOM, he’s propping Archimedes in the corner, OH A BICYCLE KNEE TO THE CORNER, ARCHIMEDES FALLS TO THE GROUND, VIC STANDING UP, ANOTHER BICYCLE KNEE! IS VIC FINALLY GOING TO FINISH THIS, HE’S PULLING ARCHIMEDES OUT OF THE CORNER, THE LEGACY, ROUNDHOUSE KICK! WAIT, BUT ARCHIMEDES FALLS ON HIS KNEES RIGHT IN FRONT OF VIC, VIC STANDING BACK…ANOTHER ROUND HOUSE KICK! VIC VENOM GOING FOR THE PIN!

(“Valkryia” plays again as Scott Venom gets into the ring to help Vic Venom up, he raises Vic’s hand before moving back to let him have his moment)

Clark Ruggerio: The man actually did it, he stopped Archimedes J. Manson’s hype train right in its tracks and kicked it right in the face

Ben Knight: This is certainly a dominant debut for Vic Venom and I’m excited to see what the future holds for him, if it’s anything like this weeks performance then we can certainly expect great things, thats for sure.

Clark Ruggerio: I couldn’t disagree even if I wanted to, thankfully we get another look at the man next week as he competes in triple threat action, facing off against Voltage’s Bowen Castillo and Martin Daniels! 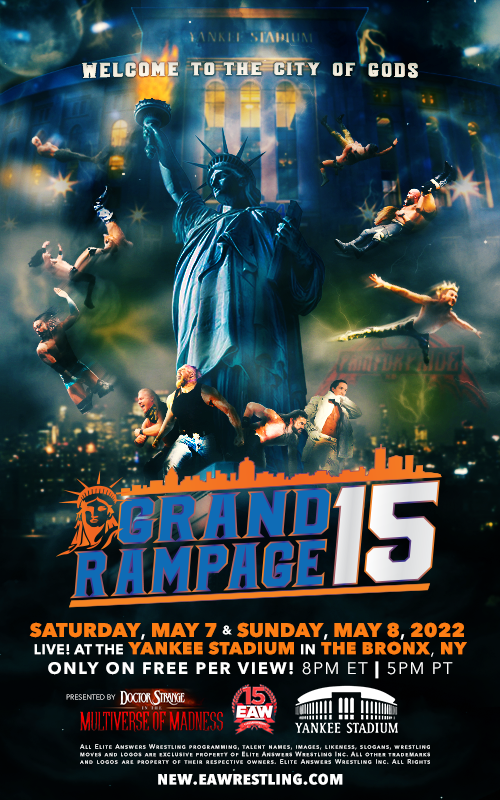